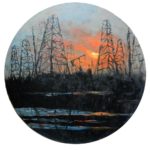 Tora Aghabayova is an Azerbaijani multidisciplinary artist  based in Berlin.

Formally trained as a painter with a Master of Fine Arts degree from the Azerbaijani State Art Academy, Tora has experimented with performance and video art at the onset of her career. Her performance piece in a format of a video installation entitled ‘Mood’ was on display at the first Azerbaijani pavilion exhibition at the Venice Biennial in 2007.

In her early paintings, Tora applied her academic style inspired by social realism to a more contemporary context. Her series ‘Oil and Dreams’, a whimsical antidote to the heroic glory of the Soviet-era industrial propaganda paintings, was exhibited at the Phillips de Pury auction house in London in 2012.

With her later work Tora has taken on a more subversive tone with which she challenged and scrutinised the accepted narratives of femininity and female representation in classical paintings. While upending these traditional narratives, the subjects of Tora’s paintings inhabited a setting imbued with magic and melancholia. For example her voluptuous male mermaids depicted languishing in lush vegetation or picturesque swamps are reminiscent of Rubenesque female nudes of the Baroque period, yet here, their traditional gender roles were inverted. These paintings were on display at the Triumph gallery in Moscow in 2019. In the words of Russian art critic Valentin Dyakonov: “Tora’s version of feminism is a radical departure from the accepted norm in her country. In her work one feels an attempt to break away from inertia.”

In her most recent series of paintings entitled “Nonexistent Myths” Tora revisits and reinvents scenes from biblical mythology. While incorporating elements of surrealism and dark humour, Tora is subtly mocking the piousness and religiosity of the Renaissance epoch art. For example in her own rendition of Jesus and Mary in Michelangelo’s Pieta, a grieving woman (self-portrait) cradles a tardigrade, a micro-sized eight-legged animal, normally inaccessible to a human eye, but here rendered sinister in monumental proportions.